Scripture: The Birth of John the Baptist

John the Baptist was an itinerant preacher and a major religious figure mentioned in the Canonical gospels and the Qur'an. He is described in the Gospel of Luke as a relative of Jesus who led a movement of baptism at the Jordan River. Some scholars maintain that he was influenced by the semi-ascetic Essenes, who expected anapocalypse and practiced rituals corresponding strongly with baptism, although there is no direct evidence to substantiate this. John is regarded as a prophet in Christianity, Islam, the Bahá'í Faith, and Mandaeism.
Most biblical scholars agree that John baptized Jesus at "Bethany beyond the Jordan", by wading into the water with Jesus from the eastern bank. John the Baptist is also mentioned by Jewish historian Josephus, in Aramaic Matthew, in the Pseudo-Clementine literature, and in the Qur'an. Accounts of John in the New Testament appear compatible with the account in Josephus. There are no other historical accounts of John the Baptist from around the period of his lifetime.
According to the New Testament, John anticipated a messianic figure who would be greater than himself, and Jesus was the one whose coming John foretold. Christians commonly refer to John as the precursor or forerunner of Jesus, since John announces Jesus' coming. John is also identified with the prophet Elijah. Some of Jesus' early followers had previously been followers of John. Some scholars have further speculated that Jesus was himself a disciple of John for some period of time, but this view is disputed. 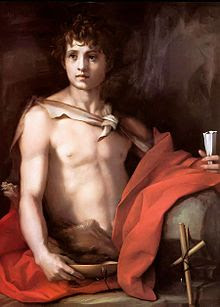 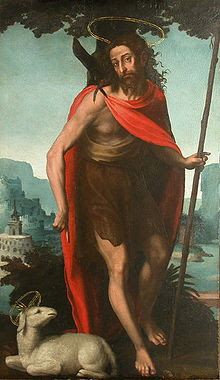 John the Baptist, by Juan de Juanes, c. 1560
Christians believe that John the Baptist had a specific role ordained by God as forerunner or precursor of Jesus, who was the foretold Messiah. The New Testament Gospels speak of this role. In Luke 1:17 the role of John is referred to as being "to turn the hearts of the fathers to the children, and the disobedient to the wisdom of the just; to make ready a people prepared for the Lord." In Luke 1:76 as "...thou shalt go before the face of the Lord to prepare his ways" and in Luke 1:77 as being "To give knowledge of salvation unto his people by the remission of their sins."
There are several passages within the Old Testament which are interpreted by Christians as being prophetic of John the Baptist in this role. These include a passage in the Book of Malachi 3:1 that refers to a prophet who would prepare the way of the Lord:

"Behold, I will send my messenger, and he shall prepare the way before me: and the Lord, whom ye seek, shall suddenly come to his temple, even the messenger of the covenant, whom ye delight in: behold, he shall come, saith the LORD of hosts." — Malachi 3:1

and also at the end of the next chapter in Malachi 4:5-6 where it says,

The Jews of Jesus' day expected Elijah to come before the Messiah; indeed, some modern Jews continue to await Elijah's coming as well, as in the Cup of Elijah the Prophet in the Passover Seder. This is why the disciples ask Jesus in Matthew 17:10, 'Why then say the scribes that Elias must first come?.' The disciples are then told by Jesus that Elijah came in the person of John the Baptist,

"Jesus replied, "To be sure, Elijah comes and will restore all things. But I tell you, Elijah has already come, and they did not recognize him, but have done to him everything they wished. In the same way the Son of Man is going to suffer at their hands." Then the disciples understood that he was talking to them about John the Baptist". — Matthew 17:11-13

(see also 11.14: "...if you are willing to believe their message, John is Elijah, whose coming was predicted.")
These passages are applied to John in the Synoptic Gospels. But where Matthew specifically identifies John the Baptist as Elijah (11.14, 17.13), the gospels of Mark and Luke do not actually make that identification, and the Gospel of John states that John the Baptist denied that he was Elijah. Thus there was apparently a shift in eschatological beliefs. (Where Matthew evidently believed that the final judgment was imminent, later authors would have been forced to concede that that "great and terrible day" had not been so imminent after all):

"Now this was John's testimony when the Jews of Jerusalem sent priests and Levites to ask him who he was. He did not fail to confess, but confessed freely, "I am not the Christ." They asked him, "Then who are you? Are you Elijah?" He said, "I am not." "Are you the Prophet?" He answered, "No." — John 1:19-21 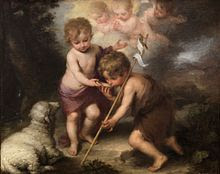 The Preaching of St. John the Baptist by Pieter Bruegel the Elder
All four canonical Gospels record John the Baptist's ministry, as does the non-canonical Gospel of the Hebrews. They depict him as proclaiming Christ's arrival. In the Synoptic Gospels (Mark, Matthew, and Luke), Jesus is baptized by John.
The Gospel of Luke includes an account of John's infancy, introducing him as the son of Zechariah, an old man, and his wife Elizabeth, who was barren. According to this account, the birth of John was foretold by the angel Gabriel to Zachariah, while Zachariah was performing his functions as a priest in the temple of Jerusalem. Since Zachariah is described as a priest of the course of Abijah and his wife, Elizabeth, as one of the daughters of Aaron, this would make John a descendant of Aaron on both his father's and mother's side.

There is no mention of a family relationship between John and Jesus in the other Gospels, and the scholar Raymond E. Brown has described it as "of dubious historicity". Géza Vermes has called it "artificial and undoubtedly Luke's creation". On the basis of the account in Luke, the Catholic calendar placed the feast of the Nativity of John the Baptist on June 24, six months before Christmas.
The many similarities between the Gospel of Luke story of the birth of John and the Old Testament account of the birth of Samuel have led scholars to suggest that Luke's account of the annunciation and birth of Jesus are modeled on that of Samuel.

Search this Blog by Keywords

Go! Set the World on Fire

Ad Majorem Dei Gloriam: For the Greater Glory of God